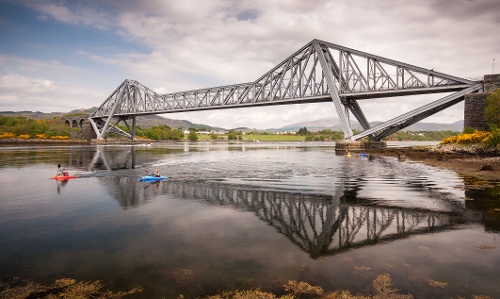 In March 2021, we hosted a past MIDAS Expert Webinar, "Case Study: Analysis for Assessment of Iconic Steel Structure Connel Bridge, Scotland" by Javier Lancho, a senior principal bridge engineer from Jacobs UK. In this session, we will learn about the existing bridge's assessment process as per the previous British Standard and check the identical model in midas Civil.

1. Why are bridge assessments necessary?

The scheme focuses on the A828 10 Connel Bridge in Scotland, UK. It was originally named Connel Ferry Bridge, located between Connel and North Connel, 5 miles northeast of Oban, Argyll. It was constructed in 1903 to carry the railway line to Fort William over Loch Etive.

The project owner was Transport Scotland; the designer was John Wolfe Barry, and the General Contractor was Arrol's Bridge and Roof Company.

The A828 Connel bridge, a typical cantilever bridge, is a 224 meters long riveted steel structure comprising two 77-meter cantilever sections supporting a 70m suspended span. The cantilever sections are supported on piers, and anchor ties are embedded at each end of the bridge's abutments.

It currently carries the road A828 over Loch Etive since a composite steel and concrete deck was installed in two phases in 1957 and 1967.

The center rail track was installed in 1903 for real traffic, and prefabricated deck units were installed on the west side in 1957. Therefore, from 1957 to 1967, the bridge was shared by road and real traffic.

Figure 3 shows the current bridge configuration. In 1967, the composite deck units were installed at the bridge's east side with a new footway and a service bay for utility services.

The client commissioned Jacobs to assess the structural capacity of the bridge to satisfy British Standards. In order to accomplish that, record information was made available by the client, and the client also carried out an inspection for assessment.

Figure 4. Connel Bridge Record Drawing
Figure 4 shows an example of a record drawing. Some of the record drawings are in good condition. According to the record drawing, the original steel structure is more than 100-year-old. On the other hand, since some of them are in poor condition or just missing, those had to be completed by taking measurements on site, as shown above.

Regarding the bridge's complexity in terms of structural analysis, the Connel bridge is quite complex in modeling. The original steel structure comprises two trusses, top bracing, cross girders at the bottom, and bracing in the vertical plane. Therefore, a large number of structural members should be modeled, as shown in Figure 5.

Outside the trusses, as shown in Figure 6 (right), there are horizontal members and diagonal bracing.

The cross-sections are not simple either since there are no regular sections found in midas Civil library since they are not predefined cross-sections. Figure 7 shows three examples of cross-sections. The center one seems to be the simplest; however, it also contains steel angles to connect the web to the flanges. 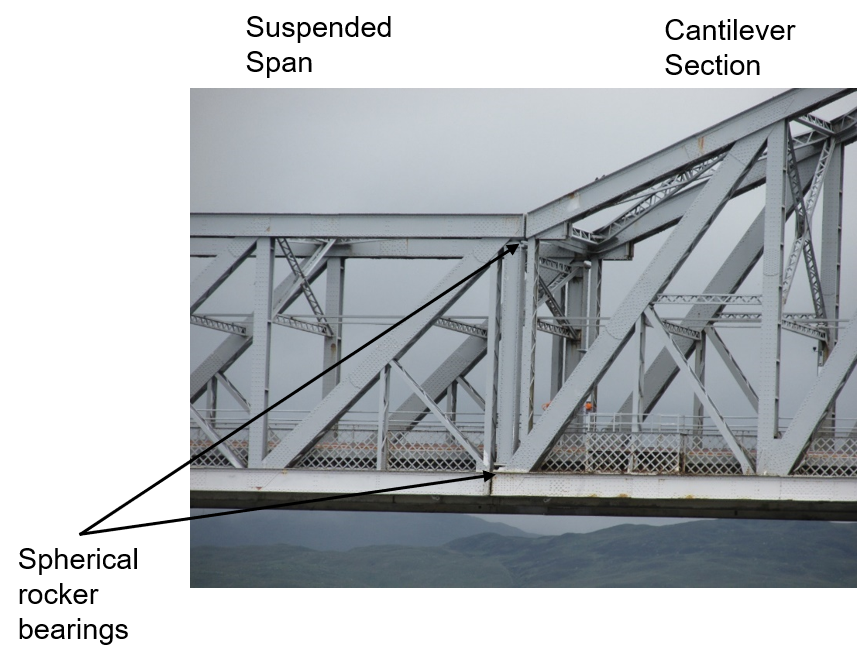 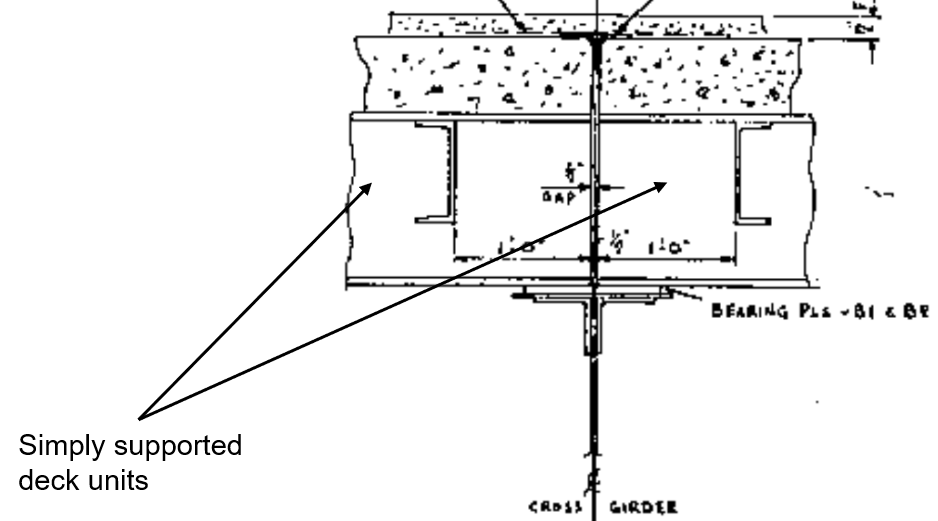 The deck is composed of prefabricated composite steel and concrete deck units simply supported on the cross girder. Therefore, the simply supported condition of the bridge is to be modeled. 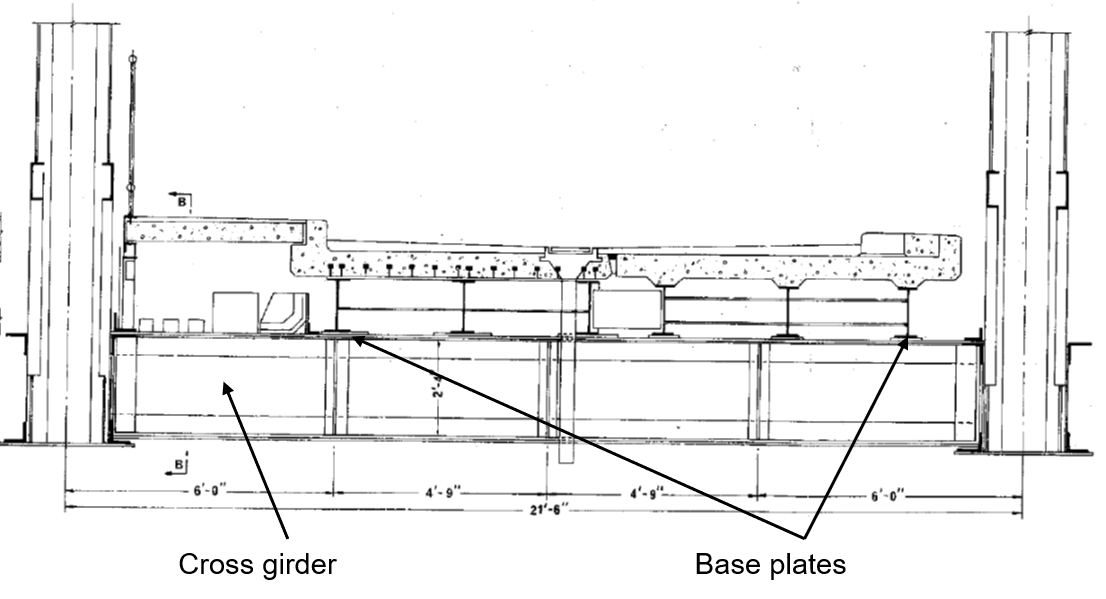 The cross-section of the bridge and the deck's longitudinal girders are welded to the base steel plates. Some of these base plates are welded and fixed to the original; however, some base plates rest on the cross girders with no further connection. They are free to move over the cross girders, provided that the friction force is exceeded. Therefore, the 'Rattle fit' of the deck is another thing to be modeled.

The deck was also modeled with beam elements by using the grillage analysis method. Furthermore, rigid vertical elements created to connect the grillage to the original steel structure are beam elements with high stiffness, inputted manually in the software. 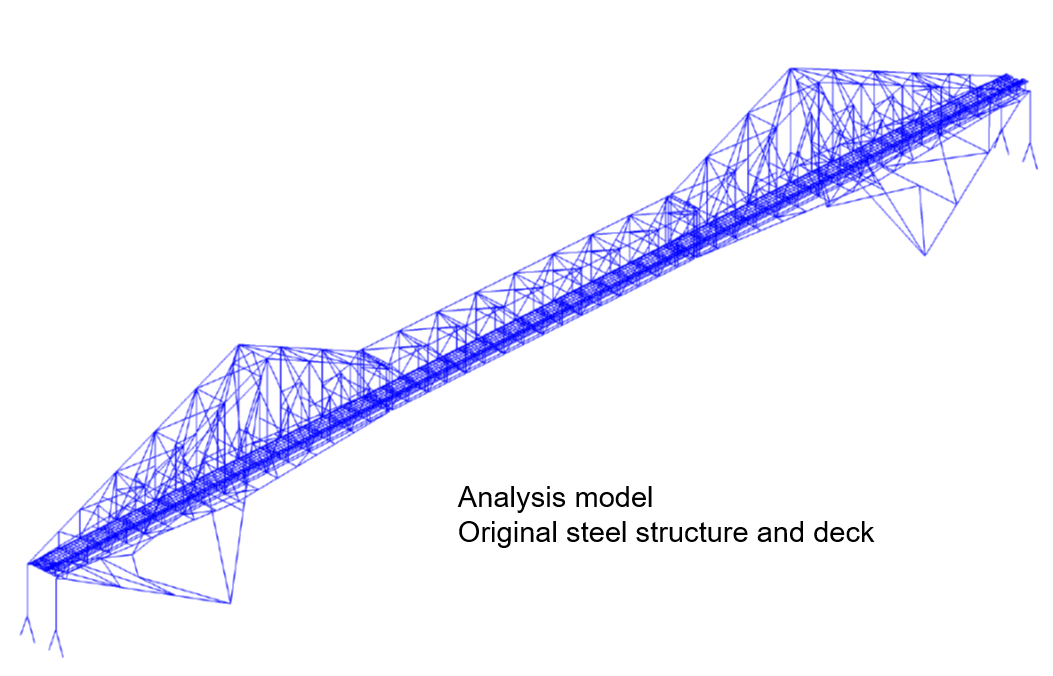 The figure above shows three examples of cross-sections. These sections were generated using the Sectional Property Calculator tool in midas Civil since the sections were not predefined.

The figure above shows a rendered view of the model. The cross-sections are assigned to their corresponding beam elements once created.

The eccentricity of traffic loads from the trusses plane was modeled by including a horizontal rigid element as shown in the figure above. The transverse element represents the cross girder, and the longitudinal element represents the bottom boom. Rigid elements are beam elements with high stiffness and can be assigned using a function in midas Civil called Rigid Link. The only difference is that the Rigid Link feature calculates the high stiffness internally.

The connections between the suspended span and the cantilever sections, the 8 spherical rocker bearings were modeled by releasing the bending moments at the ends of these vertical elements. These bending moments are released by using the midas Civil feature called Beam-End-Release. 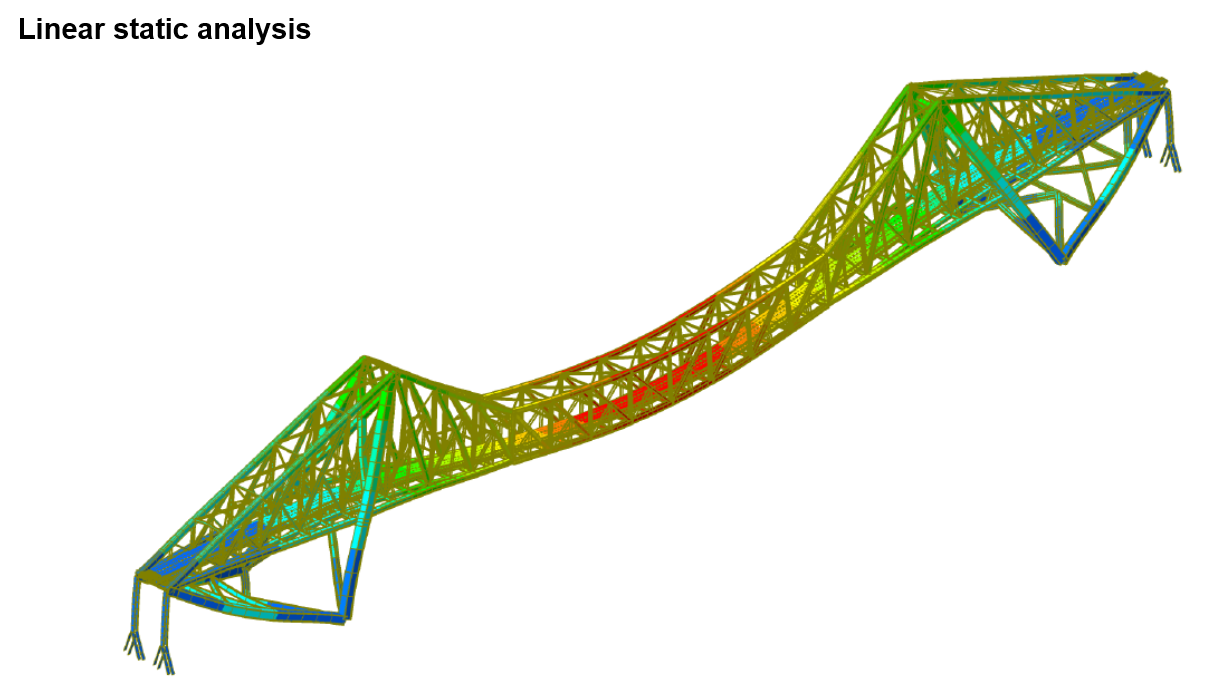 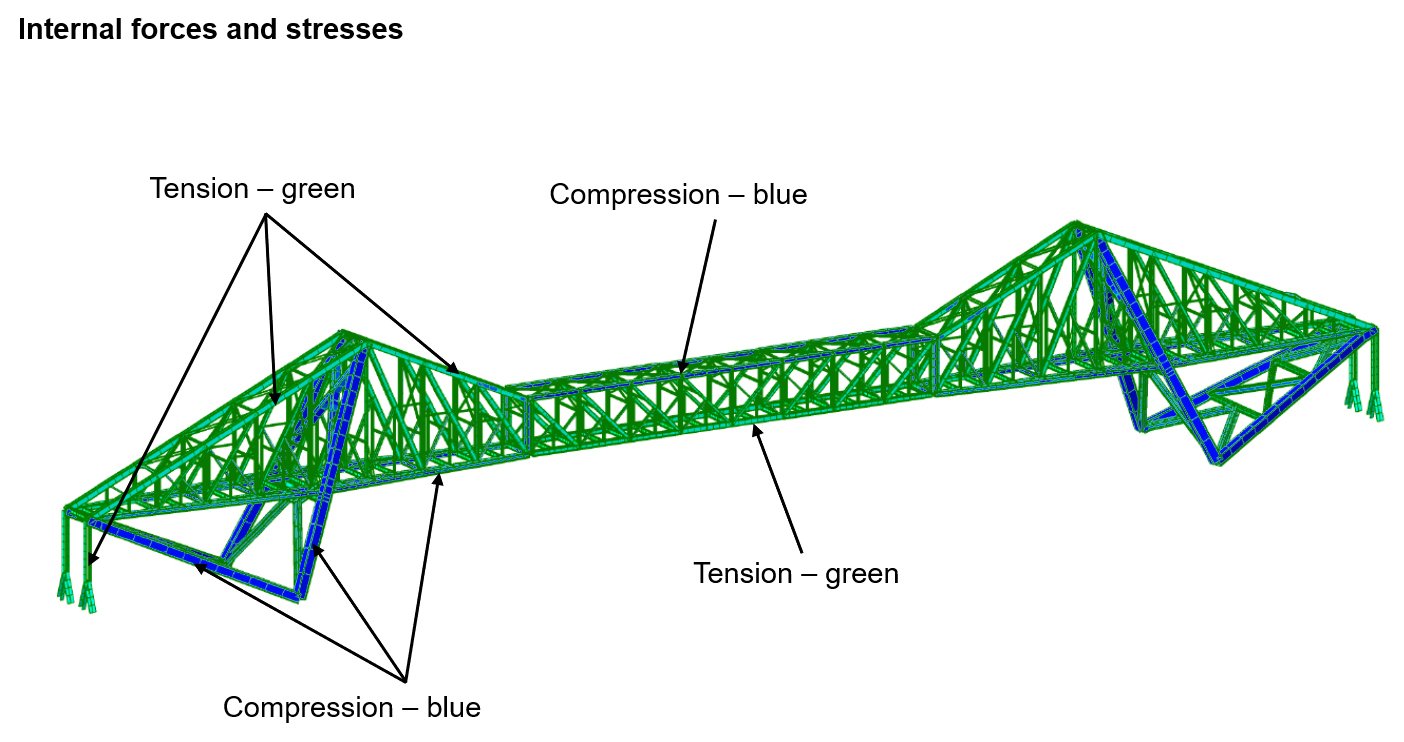 The last process of the assessment is to check the strength of members. This must be done according to BD 56/10 for structural steel and for concrete and reinforcement according to BD 44/15. The above assessment standards are based on pre-Eurocode BS 5400 (for design) and include specific assessment criteria. This webinar explains how the assessment process was carried manually; however, the same process can be carried out in the midas Civil using the new functions for assessment check standard CS 454. 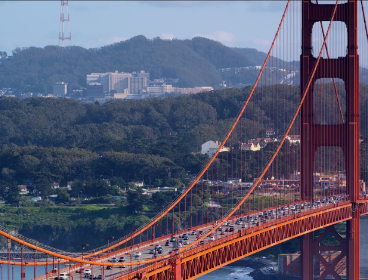 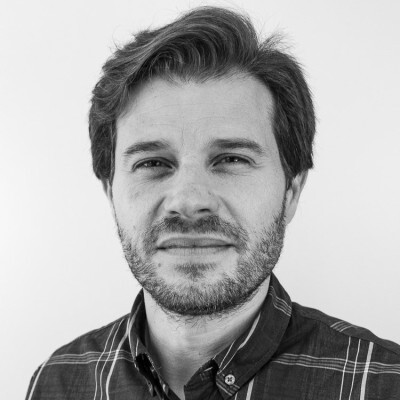 Javier is a chartered MSc Civil Engineer and MSc Structural Engineer with 19 years of service in the design and assessment of bridges, civil structures, and building structures. He has been involved in projects located in different countries, therefore, he is familiar with the international working environment and with different structural design codes. 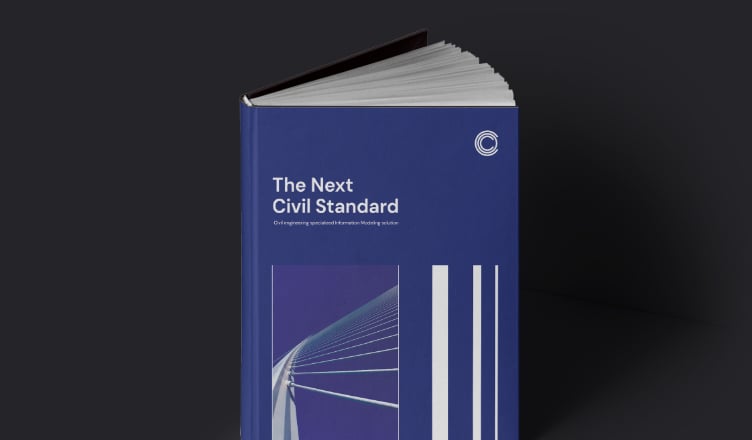